Commercial wind energy consumption first began at the beginning of the 1980s as a result of the oil crisis in the USA, and in California in particular. Although German and Swedish attempts at direct entry into large-scale wind energy technology in the USA were unsuccessful, small-scale Danish plants were the first to conquer the American market. Germany began its venture into wind energy consumption after the Chernobyl nuclear disaster of 1986. By the early 1990s, European markets had become more significant. Denmark led the way in terms of European wind energy consumption, followed by the Netherlands and Germany, and later by Spain. 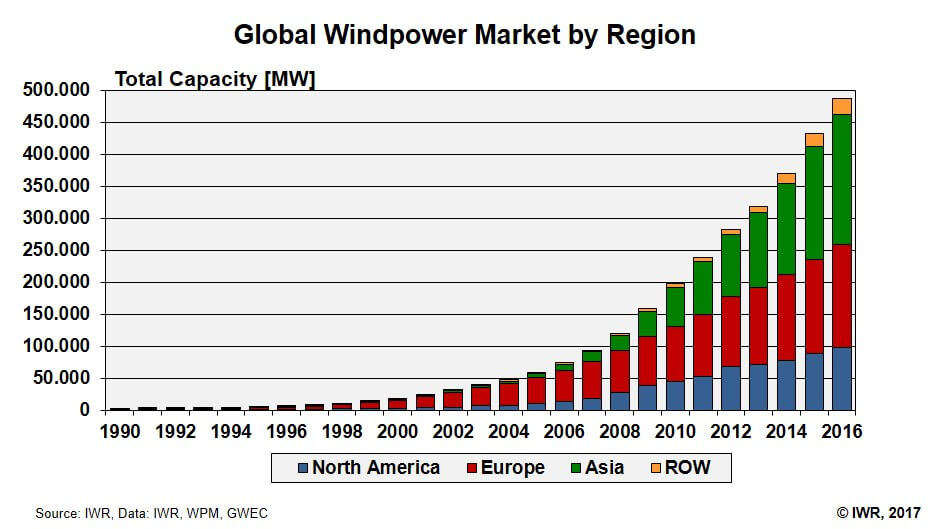 In 2000, Germany is a global market leader - Today, Asia is experiencing major growth

In subsequent years, the markets shifted significantly in favour of Asian countries. China was the most important wind energy market in 2016. With a newly installed annual capacity of 23,300 MW of wind output, China accounted for about 43 percent of all newly installed wind energy around the globe in 2016. USA followed in second place (8.200 MW) ahead of Germany (5,440 MW). The other countries to feature in last year’s Top 5 ranking were India (3.600 MW in 2016) and Brazil (2,000 MW).

Global market: growth slows down in 2016